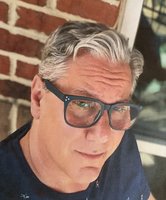 He was born in Herkimer, NY on April 21, 1966, the son of Gareld (Jerry) and the late Patricia Macrina Gallagher. Lee graduated from Herkimer High School and furthered his education at HCCC, Geneseo and Wharton's Business School. He was proud of his Herkimer beginnings and the fond memories of his youth. At one time he worked for IBM and most recently established Arts and Analytics, working as CEO. Lee brought a special passion to everything he did and was the life of the party.

He leaves his father and step-mother, Gareld and Loree Gallagher of Mohawk; his sister, Cherie Gallagher of Conway, SC; step-brothers and step-sisters, an aunt, Maryellen Macrina and many special cousins along with a multitude of friends. He will be sadly missed.

A private burial will take place with a memorial mass to be held at a later time. There will be no public calling hours.

In lieu of flowers, contributions in Lee's memory may be made to the Patty Gallagher Memorial Scholarship c/o Herkimer College, 100 Reservoir Rd.Herkimer, NY 13350.

Expressions of sympathy may be placed on Lee's online memorial page by going to www.iocovozzifuneralhomes.com