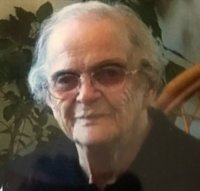 She was born in Herkimer, New York on April 29, 1925, the daughter of the late Vincenzo and Anna Mastropasqua Bonvino. She attended Herkimer schools and graduated from Herkimer High School with the class of 1942. She was married to Robert Griffin on April 13, 1946 in St. Anthony's Church. Mr. Griffin passed on February 28, 1970. Felicia was the Village Clerk & Treasurer for the Village of Herkimer for many years until her retirement in 1983. She was a communicant of Sts. Anthony and Joseph Church.

Felicia is survived by two daughters and sons in law, Barbara and Joe Collea of Ilion and Kathleen and James DeGolyer of Fulton; her grandchildren, Christine and her husband, Frank Gigante, Michelle DeGolyer, Joseph Collea III and his wife, Laurena, Robert Collea and Cathy Cluett, Eric Collea and Stephanie Dolson and Mary Kathryn and her husband, Jim Smith; eleven great-grandchildren and several nieces, nephews and cousins. She was predeceased by her brother, Anthony Bonvino.

Her funeral will be held Saturday, June 12, 2021 at 9:00 AM in STS. Anthony and Joseph Church where a Mass of Christian Burial will be celebrated by the Rev. Terance Healy and assisted by Deacons James Bower and David Losito. Interment in Calvary Cemetery. Her funeral arrangements are under the direction of the Petykiewicz, Iocovozzi & Burns Funeral Home 329 S. Washington St., Herkimer, NY.

In lieu of flowers, contributions in Felicia’s memory may be made to Alzheimer's Association, Central New York Chapter at 441 W Kirkpatrick St, Syracuse, NY 13204

Expressions of sympathy may be placed on Felicia’s online memorial page by going to www.iocovozzifuneralhomes.com