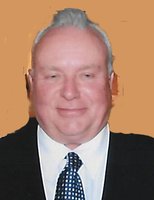 He was born in Brooklyn, New York on February 13, 1939, the son of the late Aloysius and Elizabeth Thomas Yashinski and he attended schools there. He served with the US Navy with the Airborne Early Warning Squadron and later as a Flight Engineer and was Honorably Discharged on September 11, 1962 with a rank of E4. He was married to Rita Juteau on May 21, 1960 in Sts. Peter and Paul's Church, Frankfort. Lou was at one time employed by Univac and later as a Heavy Equipment Operator for Town of Arietta Highway Department, Arietta, N.Y. until his retirement on December 9, 2009. He was a communicant of Our Lady Queen of Apostles Church.

He was an avid golfer and scored a hole-in-one during tournament play at Pine Hills Golf Course. He also was a stamp collector and a member of the American Philatelic Society. He had a special interest in astronomy. They enjoyed many years at their camp at Evergreen Lake and even resided there for 20 years. Lou was also an avid New York sports fan enjoying the Giants, Yankees and Rangers.

Louis is survived by his beloved wife of 60 years, Rita Yashinski of Frankfort; a daughter and son in law, Karina and Patrick Huther of Whitesboro; two sons and daughters in law, Louis Jr. and Madonna Yashinski of Phoenix, Az. and Leonard “Ike” and Sandi Yashinski of Frankfort; his dear grandchildren, Gabrielle Huther, Nolan Huther, Victoria Yashinski and Derek Yashinski; a sister in law, Deidra Juteau of Richfield Springs and several nieces, nephews, cousins and his special grand puppies.

His funeral will be held Tuesday morning, February 2, 2021 at 10:00 from the V.J. Iocovozzi Funeral Home, Inc. and at 10:30 in Our Lady Queen of Apostles Church where a Mass of Christian Burial will be Celebrated by the Rev. Paul Catena. Spring interment will be in Mt. Olivet Cemetery. Calling hours will be Tuesday morning 9:00 am to the time of services at the V.J. Iocovozzi Funeral Home, Inc. 203 Second Avenue, Frankfort.

The family would like to send their heartfelt gratitude to the staff at Alpine Rehab and Nursing Home, for the compassionate care they provided to Louis.

Expressions of sympathy may be placed on Louis’s online memorial page by going to www.iocovozzifuneralhomes.com