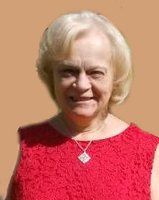 She was born in Utica, New York on January 8, 1953, the daughter of the late Joseph and Bernice Duprea Folds She attended Utica schools and graduated from UFA with the class of 1971. She later attended Mohawk Valley Community College and received her Bachelor’s Degree from SUNY IT. She was married to Robert Voce. Robert passed away on October 8, 2014. Dorothy was employed for many years at the Utica Public Library, Utica, NY until her retirement in 2015.

Dorothy is survived by one daughter, Charlotte Robinson of Cassville NY; one grandson, Mark Robinson and his fiancée, Lindsey, one great granddaughter, Emma Grace; two sisters, Bernice Beeman of Florida and Edith Bartlett of Utica who took excellent care of her sister for the past several years;  her loving nieces, Beverly and Kelly Rood Bartlett; great niece, Krystina Higgitt and her companion, Brian; one great great nephew and two great great nieces, Brian, Natalie and Anna ; her childhood best friend, Marlene Foley; her college friend, Cheryl Jassak Huther and her son, Owen; her special caretaker from Daughter for Hire, Rosalie and her private duty nurse, Courtney and several cousins. She was predeceased by her daughter, Marlene Sullivan in 1975 and her sister, Dawn Folds in 1960.

Her funeral will be held at the convenience of the family. Her funeral arrangements are under the direction of the V.J. Iocovozzi Funeral Home, Inc. 203 Second Avenue, Frankfort. Dorothy’s family would like to extend their sincere appreciation to the nurses and staff of Hospice & Palliative Care, especially Kristy, Crystal and Irene, for the wonderful care and kindness shown to her during her illness and passing. A special thank you to Dr. Matthew Ulahannan for his excellant care for Dorothy over the years.

In lieu of flowers, donations may be made to Hospice & Palliative Care, 4277 Middle Settlement Rd, New Hartford, NY 13413