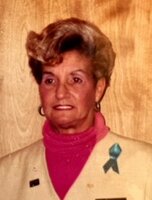 Josephine (Bono) McGraw, 92, was called by our Lord on Mother’s Day, Sunday, May 8, 2022 at Melbourne, FL Regional Medical Center.

Born in Frankfort, NY, she was the daughter of the late Natale and Filippa (Muscarella) Bono. Jo (Grandma Jo or Miss Jo to many) lived in the same Frankfort, NY house for 85 years before relocating to Fuquay-Varina, NC. She subsequently divided her time between Fuquay Varina and Melbourne, FL. She graduated from Frankfort-Schuyler Central School and Utica School of Commerce. She also later worked at Univac, General Electric, Remington Arms and Century 21. On October 28, 1950, she entered into wedded bliss with Robert (Marko) McGraw. Their loving union lasted until Marko’s untimely passing on Easter Sunday, March 26, 1978. Jo loved music, dancing and, especially, her family. Her fondest memories were of raising her two sons and being involved in the raising of her two grandchildren. She especially loved attending baseball games in which her sons and grandson participated and dance recitals and plays in which her niece participated.

Jo is survived by two sons and their special friends, Robert, Jr. and Cherly Alley of Fuquay-Varina, NC and Joseph and Melinda Lee of Melbourne/ Merritt Island, FL, her granddaughter Quinn McGraw and her fiancée, Jared Vick of Greensboro, NC and one grandson, Parker McGraw of Fuquay-Varina, NC. She is also survived by her sister-in-law, Jean Bono and many nieces, nephews and their families. Jo would also like to thank some special friends: Patty Viti, Margot Green, Pat and Jodi Doolen, Walt and Cindy Ivey and Greg and Dee Gaddis. She was predeceased by her brothers Jack and Joe Bono, her sisters Jenny Gregory and Joyce Hardee, her sisters-in-law Bella Bono and Betty Schooley and her brothers-in-law Harold Gregory and Bill Schooley.

Her funeral will be held Saturday, May 21, 2022 at 9:45 AM from the V.J.Iocovozzi Funeral Home, Inc. 203 Second Ave., Frankfort and at 10:30 in Our Lady Queen of Apostles Church were a Mass of Christian Burial will be celebrated by the Rev. Paul Catena, Pastor. Interment will be in Mt. Olivet Cemetery. Calling hours will be Friday 4-7 at the V. J. Iocovozzi Funeral Home, Inc.

A special thank you goes to the St. Francis Hospice Care staff for their excellent care over the final weeks.

Expressions of sympathy may be placed on Josephine's online memorial page by going to www.iocovozzifuneralhomes.com