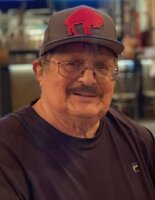 On Friday, November 4, 2022, we said goodbye to Dale Sadler. For those who didn’t know Dale, he was the guy always willing to say hello and hope to make you smile with his relentless wit. Dale lived a very full life, but he would be happy to be remembered by these few things: his devotion and love to his wife and family; a strong commitment to his faith; and his unparalleled passion for the Buffalo Bills.

Dale was born to Lynn and Helen Sadler on May 4, 1945, in Kenmore, N.Y. He enjoyed the small-town life while growing up in Sheridan, N.Y., and he graduated from Silver Creek High School before spending three years in the Air Force. He returned to his roots, where he met the love of his life, Florence. They married in Herkimer, N.Y. on July 15, 1972 and recently celebrated their 50th anniversary. He graduated from Alfred State with a Ceramic Engineering degree. He worked as a Quality Control Engineer in Central N.Y. and then in Charlottesville, Va., all while raising three children and eventually welcoming four grandsons.

Over the past 30 years, Dale could be seen on Sunday morning at Christ Community Church where he was always extending a welcoming handshake to visitors. He was an active supporter of the Bridge Ministry in Charlottesville for many years, where he helped mentor men dealing with difficult circumstances. He was a skilled auto mechanic, had an impressive knowledge of antique cars and in his earlier years, was a proficient bowler and pool player. During football season, he was a regular face at the Charlottesville Bills Backers meetups.

Relatives and friends are invited to attend his interment service at Calvary Cemetery, W. German St., Herkimer on Thursday morning, November 17, 2022 at 11:00.  His funeral arrangements have been entrusted to the Petykiewicz, Iocovozzi & Burns Funeral Home, Herkimer.

In lieu of flowers, please make donations to The Bridge Ministry at www.bridgeministry.info. A simple way to honor Dale’s legacy would be to say “Hi” to a stranger or make someone laugh.