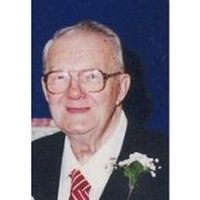 Mr. Carl F. Vogel Herkimer - Mr. Carl F. Vogel, 88, of 222 King St passed away Saturday, February 11, 2006 in Little Falls Hospital. He was born in Herkimer on February 25, 1917, the son of the late Charles and Gertrude Vogel. He attended Herkimer schools and graduated from Herkimer High School with the Class of 1935. Carl was married to Helen Rosalie Politylo on January 2, 1937 in St. Joseph´s Church, Herkimer. Mrs. Vogel passed away on February 9, 1992 after a blessed union of 55 years. Mr. Vogel was a cabinet maker for Library Bureau, Herkimer until his retirement in 1987 after 44 years of service. He was a Communicant of Sts. Anthony And Joseph Church and a member of the AFL-CIO IUE and served as President for 42 years. He was an avid pool player that had the oppurtunity to turn professional and played in tournaments throughout the country. Carl played against some of the best players in the country, notably Willie Mosconi and Babe Cranfield. Carl is survived by one daughter, Carol Vogel of Herkimer; one son & daughter in law, Carl L. & Shirley Vogel of Whitesboro; two grandsons, Shawn & his wife, Ann Foster of Utica and Carl & his wife, Melinda Vogel of Whitesboro; two great grandchildren, Sydney Vogel and William Vogel; one brother & sister in law, Charles & Katherine Vogel of Ilion; his in laws, Stella Politylo of Herkimer, Millie Pupchek of Little Falls and Robert Finkle of Santa Maria, CA; and sveral nieces, nephews and cousins. He was predeceased by his grandson, William Vogel on July 28, 1992. His funeral will be held Tuesday evening at 7:00 pm in the Petykiewicz, Iocovozzi, & Burns Funeral Home, 329 S. Washington St. Herkimer with Father Anthony Ligato, Pastor of Sts. Anthony And Joseph Church, officiating. Spring interment will be in Calvary Cemetery. Calling Hours will be Tuesday from 4-7 at the Petykiewicz, Iocovozzi, & Burns Funeral Home. Expressions of sympathy may be placed on Carl's online memorial page by going to www.iocovozzifuneralhomes.com