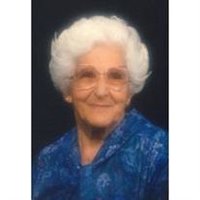 Mrs. Helen Tripolone Herkimer - Mrs. Helen Tripolone, 96, of 315 N. Bellinger St passed away Christmas day, December 25, 2005 in Valley Health Services with her loving family by her side. She was born in Herkimer on June 23, 1909, the daughter of the late Joseph and Theresa Macrina Scalise and she attended Herkimer schools. She was married to Carmello "Charlie" Tripolone on November 3, 1928 in St. Anthony´s Church, Herkimer. Mr. Tripolone passed away on August 16, 1975. Mrs. Tripolone was at one time employed by Sehring´s Glove Shop, Herkimer. She was a communicant of Sts. Anthony And Joseph Church and a member of it's Crafty Ladies. Helen's passion was knitting & crocheting. She would love to knit and crochet lap blankets, wash cloths, sweater sets and baby sets and give them to members of her family, friends, the VFW and AIDS victims. Helen is a loving mother, grandmother and sister and is survived by two daughters & son in law, Raymond & Grace Durso and Josephine Rocco all of Utica; two sons & daughters in law, Philip & Philomena Tripolone of Herkimer and Carmen & Theresa Tripolone of Utica; one sister, Aurora "Daver" Frank of Herkimer; one brother & sister in law, Edward & Eleanor Scalise of Herkimer; her sister in law, Emma Scalise of Herkimer; ten grandchildren, twenty one great grandchildren and several nieces, nephews and cousins. She was predeceased by her son in law, Anthony Rocco, four brothers, Orient Scalise, Michael Scalise, Joseph Scalise and Orleans "Cappy" Scalise and three sisters, Susan Henry, Stella Paoni and Theresa Van Vechten. Her funeral will be held Wednesday morning at 8:30 am from the Petykiewicz, Iocovozzi, & Burns Funeral Home, 329 S. Washington St. Herkimer and at 9:00 am in Sts. Anthony And Joseph Church where a Mass of Christian Burial will be celebrated by the Rev. Anthony La Fache. Interment will be in Calvary Cemetery. Calling Hours will be Tuesday from 4-8 at the Petykiewicz, Iocovozzi, & Burns Funeral Home. Helen´s family would like to extend their sincere appreciation to the nurses and staff of Valley Health Service 1 East for the wonderful care and kindness shown to her during her illness and passing. By family request, please omit floral offerings. Expressions of sympathy may be placed on Helen's online memorial page by going to www.iocovozzifuneralhomes.com