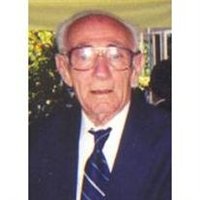 Mr. Agostino Faga Herkimer - Mr. Agostino Faga, 93, of 207 E. Steele St. passed away Monday, September 26, 2005 in Little Falls Hospital. He was born in Pianopoli, Province of Catanzaro, Italy on September 6, 1912, the son of the late Angelo and Rose Casale Faga and he attended schools there. He was married to Natalina Torchia on September 6, 1942 in St. Thomas Church, Pianopoli. He came to this country in November of 1954. Mr. Faga was employed in the boiler room for Library Bureau, Herkimer for many years until his retirement in 1977. He was also a self employed electrician throughout the Mohawk Valley for many years. He was a communicant of Sts. Anthony And Joseph Church. Agostino is survived by his beloved wife of 63 years, Natalina Faga; two sons & daughters in law, Angelo & Mary Jane Faga of Albany and Joseph & Lena Faga of Naples, Italy; two daughters & sons in law, Rosa & Donald Fitch of VA and Mary & Richard Tyner of MD; twelve grandchildren; seven great grandchildren and several nieces, nephews and cousins. He was predeceased by three sisters, Dominica Cuda, Francesca Maida and Rafeala Filippa. His funeral will be held Friday afternoon at 12:30 pm from the Petykiewicz, Iocovozzi, & Burns Funeral Home, 329 S. Washington St. Herkimer and at 1:00 pm in Sts. Anthony And Joseph Church where a Mass of Christian Burial will be celebrated by the Rev. Anthony Ligato. Interment will be in Calvary Cemetery. Calling Hours will be Thursday from 4-8 at the Petykiewicz, Iocovozzi, & Burns Funeral Home. Expressions of sympathy may be placed on Agostino's online memorial page by going to www.iocovozzifuneralhomes.com