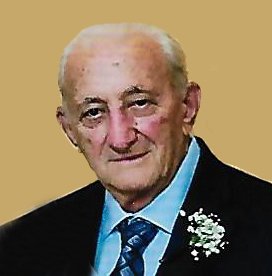 Frankfort – Mr. Joseph Anthony DiMaggio, 93, of Frankfort, passed away Saturday, June 15, 2019 at home with his family by his side.

He was born in Frankfort on October 31, 1925, the son of the late Calogero and Clara Tocco DiMaggio. He attended Frankfort schools and graduated from Frankfort High School with class of 1943. He was married to Violet DiSano on June 6, 1953 in St. Mary's Church, Frankfort. Joe was employed as a Key Punch Operator for Bendix until his retirement. He was a communicant of Our Lady Queen of Apostles Church and a member of the Addolorata Society. Joe loved to garden and enjoyed braiding garlic for his family and friends. He greatly enjoyed Wednesday morning coffee with his friends, especially Phil Rolchigo.

Joe is survived by his beloved wife, Violet DiMaggio of Frankfort; two daughters and sons in law, Diana and Louis Astafan, Jr. of Mohawk and Claire and Joseph Rocco, Jr. of Oneida; his five grandchildren, Danielle and her husband, Patrick Wilson, Joseph lll and his wife, Melissa Rocco, Louis Astafan lll and his companion, Saydia Sha, Michael Rocco and his companion, Sara Blasi, Maria Rocco and her companion, Ryan Noone; his four great-grandchildren Sam Wilson, Joseph Rocco IV, Luca Rocco and Luna Astafan; one sister, Lena Lynch of Houston, TX; his sister-in-law, Joan DiMaggio of Frankfort; a special cousin, Angela Thurston and a very special friend, Phil Rolchigo and several nieces, nephews and cousins. He was predeceased by his brother, Julio DiMaggio and his sister, Florence Campbell.

His funeral will be held Wednesday morning, June 19, 2019 at 9:30 from the V.J. Iocovozzi Funeral Home, Inc. 203 Second Avenue, Frankfort and at 10:00 AM in Our Lady Queen of Apostles Church, Frankfort where a Mass of Christian Burial will be celebrated by the Rev Paul Catena. Interment will be in Mt. Olivet Cemetery. Calling hours will be Wednesday from 8:30 AM - 9:30 AM at the V.J. Iocovozzi Funeral Home, Inc. 203 Second Ave., Frankfort.

Joe’s family would like to extend their sincere appreciation to the nursing staff at St. Elizabeth’s Medical Center for the wonderful care and compassion shown to him during his stay.

In lieu of flowers, contributions may be made to St. Jude's Children's Hospital, 262 Danny Thomas Pl, Memphis, TN 38105. Envelopes will be available at the funeral home.

To send flowers to the family or plant a tree in memory of Joseph DiMaggio, please visit Tribute Store
Print
Wednesday
19
June