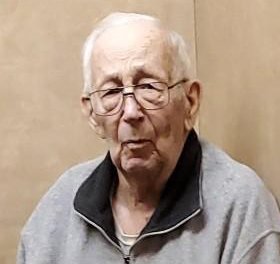 Frankfort- Clinton- Mr. Joseph James Potenza, 92, formerly of Litchfield St., Frankfort, went home to the Lord on Saturday, November 23, 2019 at St. Luke's Memorial Hospital. By his side, were his loving and caring daughter Kathy Jo Caruso and son in law, Dennis Valent. Mr. Potenza, or “Joe” as he preferred (because when you called him Mr. P., he would tell you, “that's my father...I'm Joe.”) was born in Frankfort, NY on March 21, 1927, the son of the late Nicholas and Maria Fanelli Urgo Potenza. He attended Frankfort schools, and enlisted in the US Navy on April 16, 1945 and served during WWII, on the USS Midway, that was commissioned on September 10, 1945. He was Honorably Discharged on April 10, 1950 as a Seaman Second Class. He then enlisted in the US Army Air Corps and received an Honorable Discharge as Tech Corporal on March 14, 1952. He was proud of his service to his country as a veteran of WWII and the Korean War. On August 26, 1950, Mr. Potenza (sorry, Joe...) was married to the love of his life, Kathleen (Kay) Virginia Longo in Utica, NY. They shared 67 blessed and unique years together until Kay's death on August 22, 2017. Joe built their home on Litchfield Road in Frankfort in 1962, where “Daddy gave life to Momma's dreams...” Joe worked as a mechanic at his brother's gas station, Urgo’s on Main St. in Frankfort in the 1950's to early 1960's when he then began employment at Remington Arms in Ilion until his retirement in 1985.  And that's when the fun began...Joe opened a small engine repair business, helping everyone in the Mohawk Valley with getting their lawnmowers, snow blowers, edgers, trimmers, etc. up and running again. He did this until he turned 90, when he closed up shop and moved to Brookdale Independent Living Facility in Clinton, NY. Joe loved his family, meeting new people, and telling endless stories about his youth, work experiences and fixing lawnmowers. He loved a good can of beer, a shot of BV and most of all, he loved Kay's cooking. He was a master carpenter and mechanic and could fix just about anything. He was the original “MacGyver”!!

Joe is survived by his three daughters and sons in laws, Jean and Dennis Valent of Herkimer, NY, Sandra and Thomas Migliore of Ft. Myers, FL, and Kathy Jo and Dan Caruso of New Hartford, NY; his five grandchildren, Valerie Valent, Jason and Kate Valent, Mallory and Jose Santiago, Matthew Migliore, and Nicholas Caruso. He will also be missed by his many great-grandchildren; his in laws, Phyllis Lange, Flo Longo and Elvira Potenza; his godchild, Mary Caiola LaBella and several nieces, nephews and cousins. He is predeceased by his beloved wife, Kathleen Potenza, three brothers, Frank Potenza, Tony Potenza, Louis Urgo and two sisters, Angie Pristera and Rosalie Nitti.

The family would like to acknowledge and thank the following people and agencies who added value to Joe's life since Kay's passing in 2017, Cindy Leone, for being there for Joe after Kay's passing. He loved those lunches at Heidelberg's with you, and your laughter and spirit; Veterans Administration especially Dr. P and Laura, so much kindness, attentiveness and professional care and provision from all of the medical staff; Brookdale staff, all of you have been just wonderful and accommodating; Caregivers, Inc. staff, special thanks to Frank and Maria for being there for Joe, and to Bonnie's Band of Angels and a huge thanks to Bonnie, Sharon and Tatiana who made Joe's last couple of years at Brookdale a blessing. Thanks to all who participated in Joe's caregiving. And at the helm of all of this, thanks to his daughter, Kathy Jo Caruso and son in law Dan Caruso and grandson, Nick, who put their own lives on hold to minister and administer love, care and support in every way to “On the Go Joe”... run rabbits and bark at the moon!!

Expressions of sympathy may be placed on Joe's online memorial page by going to www.iocovozzifuneralhomes.com

To send flowers to the family or plant a tree in memory of Joseph Potenza, please visit Tribute Store
Print
Tuesday
26
November