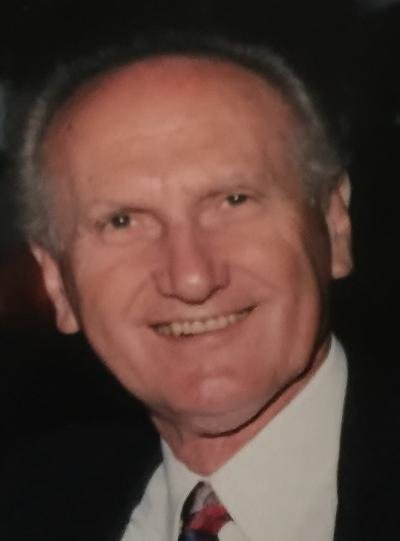 Stephen G. (Steve) Eskoff passed away peacefully at Beaumont Hospital in Royal Oak, MI on the morning of July 6 with his daughter, Denise, by his side. He was 93.

Steve was born on September 2, 1926 in Albany, NY. He grew up in Herkimer, NY and was a 1944 graduate of Herkimer High School where he was a member of the track team and played trumpet in the school band.  Following High School, Steve enlisted in the United States Army during World War II where he proudly served his country in the European Theatre of Operations, primarily in Germany. He also served as an interpreter for those held in the camps there at the end of the war. Steve served with the 394th Infantry Regiment of the 99th Infantry Division and the 12th Infantry Regiment of the 4th Infantry Division. After the war, Steve served an additional year at Camp Butner, NC and Fort McClellan, AL, where he attended Officers Training School and placed first in his class. He attained the rank of Staff Sergeant during his time of military service and was honorably discharged in 1946.

Later in 1946, Steve returned to Herkimer where he resumed employment at Loblaws, took on carpentry and building projects and later also worked at Remington Rand in Ilion, NY. While working at Remington Rand, he met the love of his life, Julia Barberio, through a family member. Steve and Julia were married on September 24, 1949 in St. Mary’s Church in Frankfort, NY. They settled in Frankfort where Steve built their home on Sixth Ave. Steve and Julia lived there for several years before moving onto the many other chapters of their lives together. They enjoyed 61 years of marriage until Julia’s passing on June 15, 2011.

In 1956, Steve took a sales and display position with Hiram Walker covering the upstate NY territory. In what became an extensive career with the company, he went onto hold several upper management positions based out of offices in New Jersey, New York City, California, Michigan and ultimately in Windsor, Canada. Steve retired as the President of Hiram Walker & Sons, Inc. in 1991 after 35 years of highly dedicated service to the company.

Steve graduated from the Mohawk Valley Technical Institute in 1958 and later studied sales management at Columbia University. He was a great public speaker and a Dale Carnegie Instructor early in his career. Steve enjoyed helping and mentoring others throughout his years in business and long after retirement. He was also an ardent supporter of numerous charitable and community causes throughout his life and was passionate about helping others. He served as a Eucharistic Minister at Beaumont Hospital in Royal Oak, MI for many years following his retirement. While living in Michigan, he gave his time to such organizations as the Saint Vincent & Sarah Fischer Center where along with his wife, Julia, provided years of volunteer service and fundraising leadership for their Farmington Hills residential facility and their programing mission. They also organized week long respite retreats for the area’s homeless, at their church, St. Owen.  In 2003, Steve headed a long-term campaign to vastly improve and expand senior services within Bloomfield Township. After years of devoted work by both Steve and his wife Julia, that campaign resulted in the building of a state of the art Senior Center that now serves many thousands of residents per year with essential services. Steve has served as Chairman of the Senior Center Advisory Board from its inception until his recent passing.

Steve will be lovingly remembered by his daughter, Denise Eskoff and William Schwerd and Steve’s extended family of grandchildren Michael (Bridgette) Schwerd, Rick (Jessica) Schwerd, Meghan Schwerd Dudley, and seven great-grandchildren; by his godsons Francis Barberio and Marc Condojani; by his cousins, nieces, nephews, great-nieces and great-nephews; by his Michigan family of cherished neighbors and friends; and by many others.

In addition to the loss of his beloved wife Julia Barberio Eskoff in 2011, Steve was predeceased by many of his treasured family members including his mother, Stephania Eskoff, his grandparents, seven aunts, five uncles, eight sisters-in-law, seven brothers-in-law, five nephews, a niece, a cousin and a great-nephew.

A funeral mass will be celebrated on Friday, July 24, 2020 a 12 pm in Our Lady of Queen Apostles Church S. Frankfort St., Frankfort, with Rev. Frank Vivacqua officiating. Interment, with military honors, will be in Mt. Olivet Cemetery in Frankfort. Calling hours will be held from 10:30 – 11:30 am prior to the funeral mass at V.J. Iocovozzi Funeral Home, Inc. 203 Second Ave., Frankfort.

In lieu of flowers, please consider donations in memory of Stephen to the Bloomfield Township Senior Center, 4315 Andover Rd., Bloomfield Hills, MI 48302 or Our Lady Queen of Apostles Church, 414 S. Frankfort St., Frankfort, NY 13340 or to the charity of your choice.

Expressions of sympathy may be placed on Steve’s online memorial page by going to www.iocovozzifuneralhomes.com

To send flowers to the family or plant a tree in memory of Stephen Eskoff, please visit Tribute Store
Print
Friday
24
July