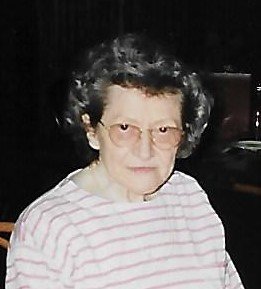 Please share a memory of Olga to include in a keepsake book for family and friends.
View Tribute Book

She was born in Herkimer on July 2, 1922, the daughter of the late John and Hafi Drone Nimy. She attended Herkimer schools and graduated from Herkimer High School with the class of 1940. She was employed as a Clerk in the Accounting Department for Remington Rand in Ilion for many years until her retirement in 1976. She was a member of St. Mary's Ukrainian Orthodox Church in Herkimer and a member of its Sisterhood. She was very active in the church and at one time served as President, Vice President, Secretary and Treasurer.

Olga is survived by her cousins, David and Geraldine Valasek of Herkimer, Cornelia Knox of Mohawk, Donald and Kathy Schultz, Clifford Schulz and Julianne Drake all of Buffalo. She was predeceased by her brother, Charles Wasyl Nimy On December 12, 1976.

Expressions of sympathy may be placed on Olga’s online memorial page by going to www.iocovozzifuneralhomes.com

To send flowers to the family or plant a tree in memory of Olga Nimy, please visit Tribute Store
Print
Saturday
18
July