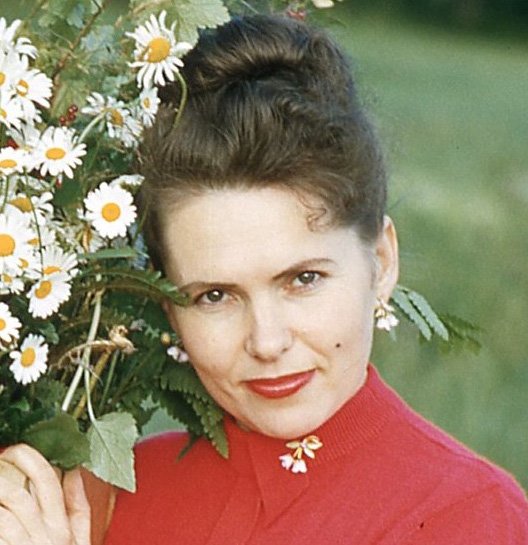 Please share a memory of Ludmila to include in a keepsake book for family and friends.
View Tribute Book

Little Falls - Ludmila (Klinskaya) Stehnach, 93, of Little Falls, NY passed away peacefully on Tuesday, August 25th at St. Johnsville Rehabilitation & Nursing Center, St. Johnsville.  At the time of her passing, Ludmila was at peace in the company of her loved ones who have preceded her and was prepared to be with God. Mrs. Stehnach was a member of Sts. Peter and Paul Orthodox Church of East Herkimer, NY.

She was born on October 9, 1926 in St. Petersburg, Russia, the daughter of the late Ivan Ivonovich Klinskaya and Helena Danilova Klinskaya. She also had an older sister Vayla. Shortly after Ludmila’s birth, the family moved to her parents’ home town of Melitopol, Ukraine. It was in Melitopol that Ludmila became a well-known and accomplished singer and stage performer. During her childhood, the city of Melitopol and Ludmila’s family suffered the onset of WW2 losing her mother when she was 14, having her father conscripted into the Red Army, and seeing her sister taken away to a forced labor camp in Germany. During the war, Ludmila survived essentially as an orphaned teenager, always moving away from Russian and German combat areas. At the end of WW2, she found safety in Innsbruck, Austria where she saw American troops for the first time. Ludmila existed as a Displaced Person in post WW2 Germany, unable to return to her home and not knowing if any of her known family members survived.

In 1952, she met, her future husband, U.S. Army Captain Michael N. Stehanch, in Munich, Germany and married on November 8, 1953 at St. Niklas Orthodox Church in Stuttgart, Germany. They came to the United States in the fall of 1954 with their daughter Peggy and resided in Dolgeville, NY until moving to Little Falls, NY with Peggy and their son John in 1965. In 1963, Ludmila and her family returned to Russia to reunite with her father, sister and other family who survived WW2.

In lieu of flowers, memorial contributions may be made to Sts. Peter and Paul Orthodox Church, 305 Main Rd. East Herkimer, NY 13350.

Expressions of sympathy may be placed on Ludmila's online memorial page by going to www.iocovozzifuneralhomes.com

To plant a beautiful memorial tree in memory of Ludmila Stehnach, please visit our Tree Store

A Memorial Tree was planted for Ludmila
We are deeply sorry for your loss ~ the staff at Petykiewicz, Iocovozzi & Burns Funeral Home
Join in honoring their life - plant a memorial tree
Services for Ludmila Stehnach
There are no events scheduled. You can still show your support by planting a tree in memory of Ludmila Stehnach.
Plant a tree in memory of Ludmila
Print
Online Memory & Photo Sharing Event
Online Event
About this Event