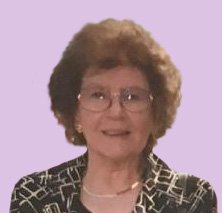 Please share a memory of Anne to include in a keepsake book for family and friends.
View Tribute Book

She was born in S. Columbia, New York on February 16, 1925, the daughter of the late Elek and Justina Wereszczak. She attended Mohawk Schools and graduated from Mohawk High School and later attended Utica School of Commerce. She was married to Theodore Cioch on May 26, 1951 in St. Mary's Ukrainian Orthodox Church. Ted passed away on July 4, 2016. Anne was employed in the Radio Receiving Department for General Electric and later for MDS in Herkimer for many years. She was a communicant of Christ Episcopal Church in Herkimer.

Her funeral will be held Wednesday evening at 7:00 in the V.J.Iocovozzi Funeral Home, Inc., 203 Second Ave., Frankfort with the Rev. Steve Scarcia, officiating. Interment will be at the convenience of her family in Oak Hill Cemetery. Calling hours will be Wednesday evening from 5:00 until the time of services at the V.J.Iocovozzi Funeral home, Inc. Her funeral arrangements are under the direction of the Petykiewicz, Iocovozzi & Burns Funeral Home 329 S. Washington St., Herkimer, NY.

In lieu of flowers, contributions may be made to Hospice & Palliative Care, Inc. 4277 Middle Settlement Rd. New Hartford, NY 13413. Envelopes will be available at the funeral home.

Expressions of sympathy may be placed on Anne’s online memorial page by going to www.iocovozzifuneralhomes.com

To send flowers to the family or plant a tree in memory of Anne Cioch, please visit Tribute Store
Wednesday
23
September

Look inside to read what others have shared
Family and friends are coming together online to create a special keepsake. Every memory left on the online obituary will be automatically included in this book.
View Tribute Book

Share Your Memory of
Anne
Upload Your Memory View All Memories
Be the first to upload a memory!
Share A Memory
Send Flowers
Plant a Tree