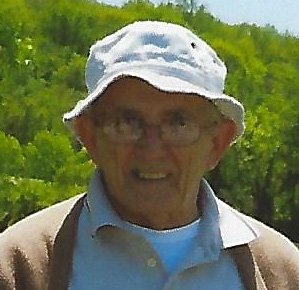 He was born in 1929 in Herkimer, a son of the late Nicola and Brigida Paoni. He graduated from Herkimer High School, class of 1947 and Clarkson University, BS Electrical Engineering class of 1958 (once an engineer, always an engineer). He married Mary Nanette Van Slyke in August 1956, with whom he raised six children, two cats, three miniature schnauzers and garden gnomes. He was a long-time member of St. John the Evangelist Church in New Hartford, NY.

He served in the US Army Signal Corps, 2 years active duty stateside during the Korean War. Bob's summer jobs saw him working on building the NYS Thruway and Eisenhower Lock, St. Lawrence Seaway. He retired in 1994, after working 36 years in Federal Civilian Service as a Supervisory Electronic Engineer at Griffiss AFB and McClellan AFB, supporting various military and government operations worldwide.

Bob moved to Rochester to be closer to family, although he continued to live independently. He maintained a jovial sense of humor and enjoyed growing tomatoes, bucket hats, polka music, and the NY Giants. He enjoyed several self-taught hobbies including drawing, playing the piano and the harmonica.

His funeral will be held Friday, June 11, 2021 at 9:00 am in Sts. Anthony and Joseph Church where a Mass of Christian Burial will be celebrated by the Rev. Leo Potvin and assisted by Deacon James Bower. Interment will be in St. Mary's Cemetery. Funeral arrangements are under the direction of the Petykiewicz, Iocovozzi & Burns Funeral Home, Inc. Herkimer.

The family wishes to thank the Medical Staff at Strong Memorial Hospital, Unit 614 and ICU, Unit 816 for the wonderful care and compassion given to Bob.

Contributions in Bob's name may be made to his favorite charity, Hospice & Palliative Care, 4277 Middle Settlement Rd. New Hartford, NY 13413.

Expressions of sympathy may be placed on Bob’s online memorial page by going to www.iocovozzifuneralhomes.com

To send flowers to the family or plant a tree in memory of Robert Paoni, please visit Tribute Store
Print