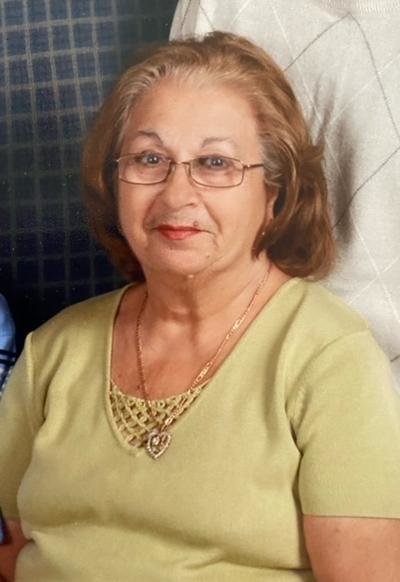 Please share a memory of Rosaria to include in a keepsake book for family and friends.
View Tribute Book

Frankfort - Rosaria "Sarina" Galante, 78, of Frankfort passed away Tuesday, April 27, 2021 in St. Luke´s Memorial Hospital with her family by her side.

She was born in Castellammare De Golfo, Province of Trapani, Sicily, on January 4, 1943, the daughter of the late Antonino and Giovanna Ferro Lombardo and she attended schools there.

She was married to Ferdinando Galante on January 6, 1961 in Castellammare Del Golfo. Ferdinando passed away on April 1, 2017.  She was a communicant of Our Lady Queen of Apostles Church.

Rosaria is survived by three sons and one daughter in law, Luigi Galante and Antonino Galante both of Frankfort and Fred and his wife, Joanie Galante of Yorkville; three daughters and one son in law, Antonina Galante of Frankfort, Giovanna Conley of Vero Beach FL and Palma and her husband, Mark Medici of Utica; three brothers and two sisters in law, Peter and Rosa Lombardo, Giuseppe and Anna Marie Lombardo and Vito Lombardo; two sisters and one brother in law, Enza and Steve Olsen and Maria Buccellato;  her grandchildren, Frank Bonpietro and his companion, Dominique, Giovanna and her husband, Kyle Hallstein, Irene Bonpietro and her companion, Joseph, Drake Galante, Dominique Galante, Felicia Medici and Luke Medici; three great grandchildren, Joseph Triburgo, Christian Triburgo and Mia Bonpietro and several in laws, nieces, nephews and cousins.

Her funeral will be held Wednesday, May 5, 2021 at 10:30 AM in Our Queen of Apostles Church, S. Frankfort St where a Mass of Christian Burial will be celebrated by the Rev. Paul Catena, pastor. Interment will be in St. Raymond's Cemetery, Bronx on Thursday at 11:15.  Her funeral arrangements have been entrusted to the V. J.  Iocovozzi Funeral Home, Inc.

Expressions of sympathy may be placed on Rosaria’s online memorial page by going to www.iocovozzifuneralhomes.com

To send flowers to the family or plant a tree in memory of Rosaria Galante, please visit Tribute Store
Print
Wednesday
5
May