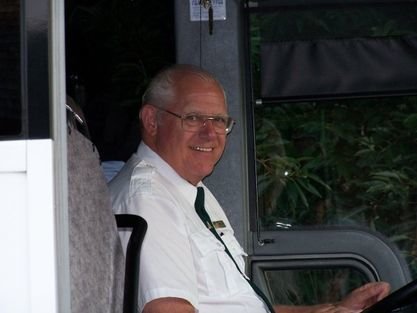 Please share a memory of Gary to include in a keepsake book for family and friends.
View Tribute Book

He was born in Utica, New York on August 10, 1937, the son of the late Delbert John and Edna Irene Menge Baker He attended Chadwicks High School and graduated with the class of 1955. Gary served with the US Air Force, later with the NYS National Guard and the US Army and was Honorably Discharged in 1966. He was married to Mary Jane Pileggi on June 9, 2001 in Assembly of God, Marcy. Gary was a Tour Bus Driver for many years driving for, Utica Rome Bus, Pumpkin Coach and lastly for Bernie Bus Service for the past 22 years. He was an active member of the Center Point Christian Fellowship Church.

Gary is survived by his beloved wife, Mary Jane Baker; two sons and daughters in law,Derek and April Baker of Augusta GA and Sean and Mandi of Las Vegas NV; one brother, John Baker of St. Augustine FL; one sister and brother in law, Susanne and George Kingos of St. Augustine FL; his step children and their wives, Rick and Mary Jo Scienza of Forestville, Jay and Nicole Scienza of Marcy of James and Lori Scienza of Cummings, GA.; six grandchildren two great grandchildren and several nieces, nephews and cousins.  He was deceased by his step mother, Elizabeth Mable Baker

His funeral was held at the convenience of the family with interment in Greenlawn Cemetery. Funeral arrangements are under the direction of the V.J. Iocovozzi Funeral Home, Inc. 203 Second Avenue, Frankfort. .

Expressions of sympathy may be placed on Gary’s online memorial page by going to www.iocovozzifuneralhomes.com

To plant a beautiful memorial tree in memory of Gary Baker, please visit our Tree Store

A Memorial Tree was planted for Gary
We are deeply sorry for your loss ~ the staff at V.J. Iocovozzi Funeral Home, Inc.
Join in honoring their life - plant a memorial tree
Services for Gary Baker
There are no events scheduled. You can still show your support by planting a tree in memory of Gary Baker.
Plant a tree in memory of Gary
Print
Online Memory & Photo Sharing Event
Online Event
About this Event