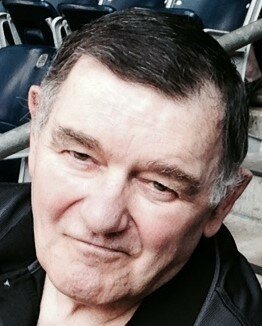 Please share a memory of Allen to include in a keepsake book for family and friends.
View Tribute Book

He was born in Herkimer, New York on February 2, 1946 - the son of the late John Wiegand and Stella Szczerbaniewicz.  Allen attended Herkimer schools, after his graduation he served during The Vietnam War in The United States Air Force and was Honorably discharged in 1968.  Allen was employed by Babbitt Bearings, Syracuse, NY.  He was a communicant of Saint Anthony and Joseph Church, avid fan of NASCAR, fine food (and snack) aficionado and most importantly he loved spending time with his family.

Allen is survived by two sons: Daniel Wiegand with wife Peggy, of Houston TX and Allen Sours Jr. of Greenville NC and one daughter: Shannon Wafer (Wiegand) with husband Chuck of Lawrenceville GA; one brother, Edward Wiegand of Herkimer; one sister, Cathy Burton of Charlottesville VA; his cherished grandchildren, Devon and Katelyn; his beloved canine, Wyland and several nieces, nephews and cousins. He was predeceased by his brother, John Wiegand.

His funeral will be held Thursday, May 5, 2022 at 9:30 AM – at St. Anthony & Joseph Church, S. Main St. Herkimer where a Mass of Christian Burial will be celebrated by the Rev Terence Healy and assisted by Deacon James Bower. Interment will be in Calvary Cemetery. Calling hours will be Wednesday, May 4 from 4:00 PM - 7:00 PM at the V.J. Iocovozzi Funeral Home Inc. 203 Second Ave., Frankfort. Funeral arrangements are under the direction of the Petykiewicz, Iocovozzi & Burns Funeral Home.

In lieu of flowers, contributions in Allen's memory may be made to Salvation Army, 431 N Prospect St, Herkimer, NY 13350 as well as Wounded Warrior Project, 4899 Belfort Road, Suite 300 Jacksonville, FL 32256. Envelopes will be available at the funeral home.

Expressions of sympathy may be placed on Allen’s online memorial page by going to www.iocovozzifuneralhomes.com

To send flowers to the family or plant a tree in memory of Allen Wiegand, please visit Tribute Store
Print
Wednesday
4
May