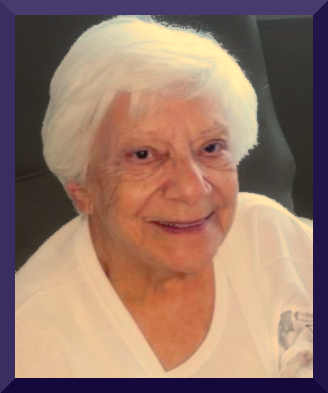 Please share a memory of Maria to include in a keepsake book for family and friends.
View Tribute Book

LAKE WORTH, FL - Maria Vivirito Burke, 98, of Lake Worth, FL, died of congestive heart failure Wednesday, July 27, 2022, 7:25 a.m., at the home of her daughter under the supervision Trustbridge of Hospice of Palm Beach County. Everyone knew her as Marie.

Born in Frankfort, NY, on March 10, 1924, Marie was the daughter of Rosario and Mary (Mannino, aka Maneen) Vivirito.  She was a resident of Oneida, New York, for 31 years, and then, after retiring to Florida, resided in Naples for 22 years and in Lake Worth for the past eleven years. While living in Oneida, Maria was a faithful communicant at St. Patrick Catholic Church. After relocating to Florida, she attended St. Finbarr Catholic Church, Naples, and then, St. Therese de Lisieux Catholic Church, Wellington; both of which she was an active member.

Marie married Donald M. Burke in Frankfort, New York, on June 23, 1945. Along with her husband, she worked hard to raise a family of three children, including jobs at Remington Arms, Ilion, NY, and General Electric in Utica and in Syracuse, NY. Marie also worked as a short order cook at the local bowling alley and assisted her husband in his seven-year venture as owner of a beachside bar/restaurant in Verona Beach, NY. She eventually landed a job as a clerk in the office of the Madison County Property Tax Assessment Department where she proudly liked to brag that she was “working with computers that took up the entire room.”

During her working years when her children were young, Marie enjoyed hobbies such as sewing, knitting, furniture refinishing and chair caning. She shared her talents with other women through an organization called the Ladies Home Bureau. Marie and her husband later cultivated a vegetable garden in the backyard which then required her to harvest and can the fruits of her labor. In summary, Marie led a simple life of honest, hard work with the goal of providing for her family.

In her retirement years, Marie earned the right to do the things she never had time to do when working. She learned to speak Spanish, play the keyboard, and do genealogy research. Her interest in genealogy and ability to use computers led her to discover and eventually meet the cousins she never knew on her father’s side of the family in Sicily. She was able to travel to Sicily/Italy on four different occasions. Marie maintained contact with her Sicilian relatives for the remainder of her life through the use of Facebook. She also created an extensive history of her ancestry on both sides of her family using a program called Family Tree Maker, which eventually inspired her son, Robert, to expand upon the research she started. Until three months before her passing, Marie lived independently in her own home and continued to drive her car.

The family would like to thank all those professionals and volunteers at Trustbridge Hospice of Palm Beach County for the excellent care and attention that was provided to Marie as she patiently endured the suffering which occurs at the end of a long life well lived. As expressions of sympathy in her memory, contributions may be made to Trustbridge Hospice of Palm Beach County https://trustbridge.com/donate-now/, or Memorials to the St. Therese de Lisieux Building Fund, 11800 Lake Worth Road, Wellington, FL 33449.

Her funeral arrangements have been entrusted to the V.J.Iocovozzi Funeral Home, Inc. Frankfort

Expressions of sympathy may be placed on Marie's memorial page by going to www.iocovozzifuneralhomes.com

To plant a beautiful memorial tree in memory of Maria Burke, please visit our Tree Store

A Memorial Tree was planted for Maria
We are deeply sorry for your loss ~ the staff at V.J. Iocovozzi Funeral Home, Inc.
Join in honoring their life - plant a memorial tree
Services for Maria Burke
There are no events scheduled. You can still show your support by planting a tree in memory of Maria Burke.
Plant a tree in memory of Maria
Print
Online Memory & Photo Sharing Event
Online Event
About this Event